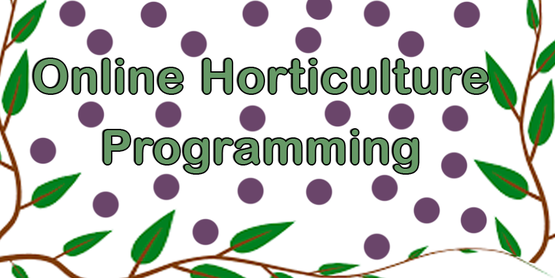 Our Horticulture Specialist Jolene Wallace is working hard to adapt to the ongoing COVID-19 situation. At this time, Jolene will continue to answer your yard and gardening questions, but she will be doing so from home. In lieu of bringing samples into the office, please email her good, clear, photos of whatever is concerning you. Email her at jmw442@cornell.edu or cceclintoncounty@gmail.com

Note: Due to space restrictions for a single landing page, the blog from March and April have now been archived and can be found at the following links:

Education Videos about Ticks for Kids: 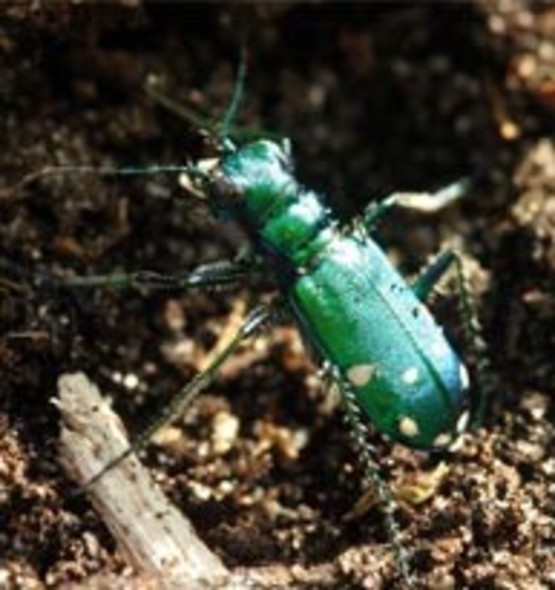 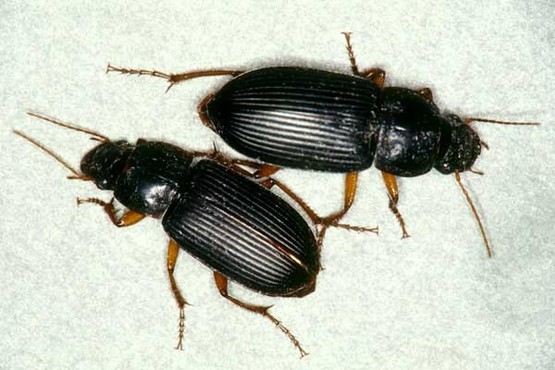 Soldier Beetles-- Both adults and larvae are predacious and feed on other insects. The adults eat caterpillars, aphids, and other soft-bodied insects and can be important predators. As they lie in wait for prey on flowers such as goldenrod they may feed on nectar and pollen but they do no damage to the plants.-- Iowa State University Extension and Outreach 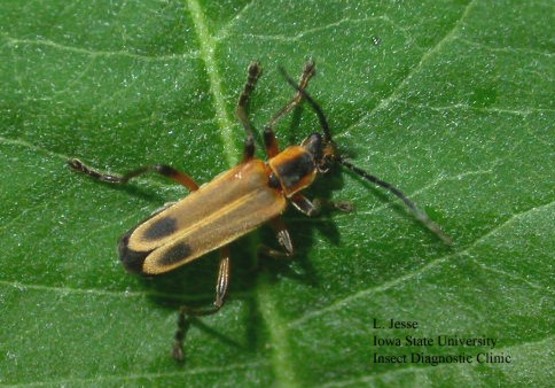 Today I am borrowing from Susan I. Sparrowbush, Senior Master Gardener of Orange County, NY

excellent article on bees and wasps.

This article appeared in the June 2019 Issue of Gardening in Orange County.

Although wasps are usually considered pests, adult wasps are considered beneficial since they capture insects for their developing larvae. They also feed on sweet nectar (and can annoy picnics in late summer by scavenging on human food).

Some of the more common wasps found in our area are yellow jackets, bald-faced hornets, and paper wasps. Yellow jackets usually build their nests in the ground or in voids found in buildings. Their colonies last only one season and nests are not reused. Bald-faced hornets are actually not true wasps, but a type of yellow jacket. They are large black and white wasps that make the grayish papery, pear-shaped hives (mistakenly illustrated as Winnie the Pooh’s “honey bee hive”) found hanging from trees or shrubs. Bald-face hornets also do not reuse their nests. Like the bald-faced hornets, paper wasps also make papery nests, but their nests have open combs.

Just remember that wasps are considered beneficial, so unless their nests are in an undesirable place, they should be left alone. One way to dissuade wasps from nesting near your home is to use an imitation wasp nest. (These can be crocheted or purchased.)As visual creatures, when they see another “wasp” nest in the area they assume it’s another competitor and do not build there. 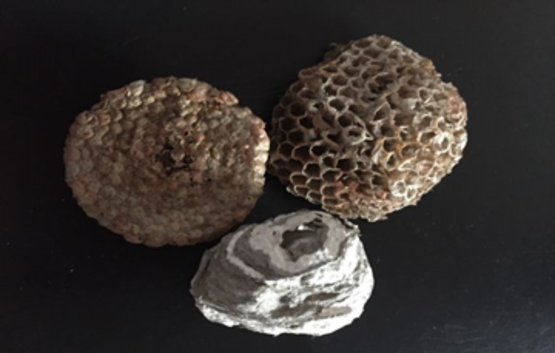 When you think of bees do you think of honey bees and bee hives? There are 416 bee species in New York State. The majority (54%) are digger bees (ground-nesting, solitary bees). Some, like mason bees and leaf-cutter bees, nest in cavities like beetle burrows and hollow stems. 23% are parasitic bees.

Parasitic bees lay their eggs in the nest of other bees. When the larva hatch, it kills the host egg or larva and feeds on its pollen. The rascals!

Would you be surprised to know that the honey bee is not a native bee to the United States? It was introduced to the East Coast of North America in 1622 by European and Spanish settlers. Then again:

This 14-million-year old fossil which has been identified as a honey bee raises a lot of questions. What happened to it? Did it pollinate flowers? Were there flowers 14-million-years ago?

University of California School of Agriculture and Natural Resources 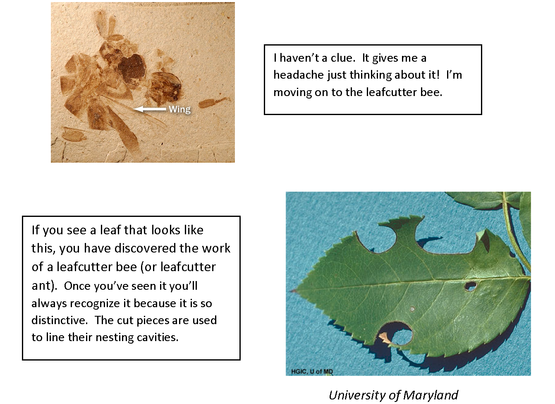 This week we are going to talk about pollinators. I’m sure you know that they are important for our food supply, but you may not know how vital they are.

Of the 1,400 crop plants grown around the world, i.e., those that produce all of our food and plant-based industrial products, almost 80% require pollination by animals. -- USDA

How many groups of pollinators can you name?

A list of 8 can be found at the end of this blog. 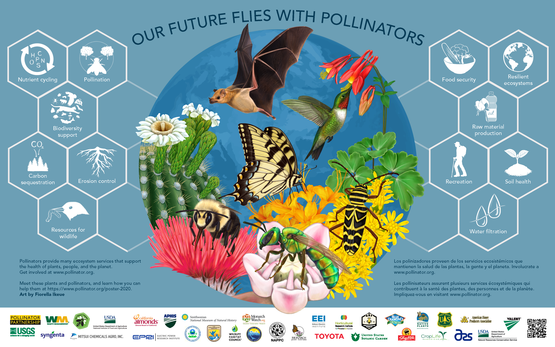 Bumble bees are my favorite pollinator. They are so fuzzy and round. They look like tiny stuffed animals. When my son, Ben, was four, we were sitting at the picnic table and he was coloring. He noticed a bumble bee sitting on his orange crayon and tried to pet it. Bumble bees are not aggressive, but petting it was seen as a threat and it stung my son’s finger. It hurt of course, but Ben was more distressed that the bumble had not been appreciative of his kindness toward it. A simple misunderstanding, I’m sure.

DO YOU KNOW WHAT THIS IS?

It’s actually the larva of a ladybug. 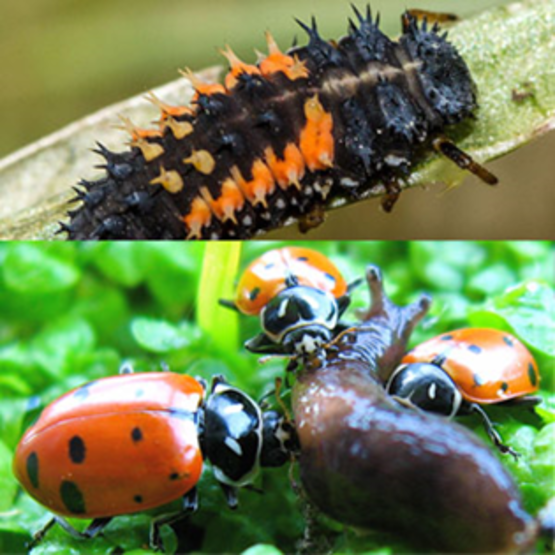 This is a pupa of a lady bug. 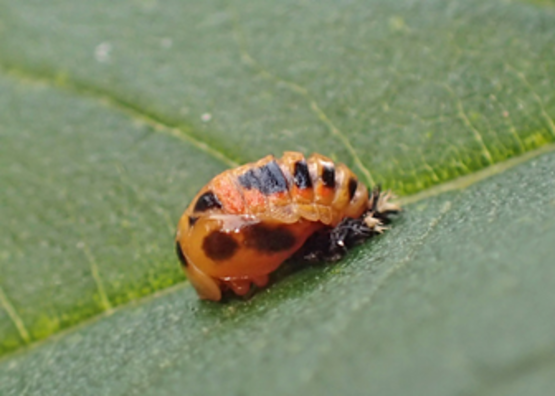 After this stage the lady bug is ready to meet the world.

Ladybugs are actually Lady Beetles. You can tell they’re beetles because the wing covers, called

elytra, come together in the middle. The elytra protect the wings, and protects the ladybug from predators. 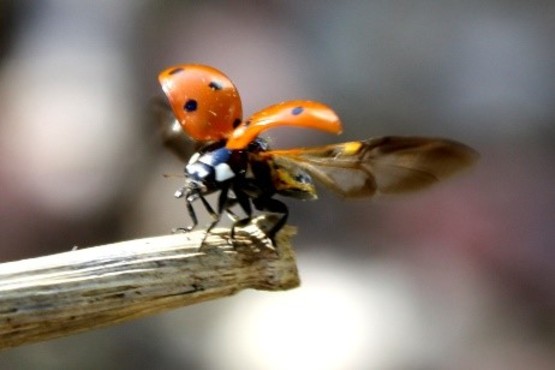 June 23rd: A Baby Porcupine is Called A?

Yesterday was a high-traffic day at our house. It began with another turtle laying eggs in a flowerbed, that’s three so far. Then the workers, who are retiling two of our floors, were here for several hours. Then our refrigerator wouldn’t get cold so the refrigerator repairman was here. And last, but not least, while we were eating dinner a huge porcupine walked through our yard.

The only other porcupine I have seen was at the Wild Center in Tupper Lake. They had a docent with the porcupine telling us all about it. The docent was telling us, not the porcupine. It was very interesting and really cool. If you haven’t been, you should try to get there with the kids.

The North American Porcupine is surprisingly large. The only rodent in North America larger is the beaver. You know that it has quills, but do you know it has up to 30,000 of them? The quills are about 3 inches long, and hollow. They are lightly attached, and easily dislodged into the offending creature. Not easily removed, as the ends have backward-facing barbs. If you have ever seen a dog that tried to grab a porcupine, you know it is a painful and sad sight.

Porcupines are nocturnal although it was still daylight when the one was walking across the lawn. I saw it climb a tree so maybe it was hungry, or had a nest, or was doing whatever porcupines do in trees.

DID YOU KNOW? A baby porcupine is called a porcupette 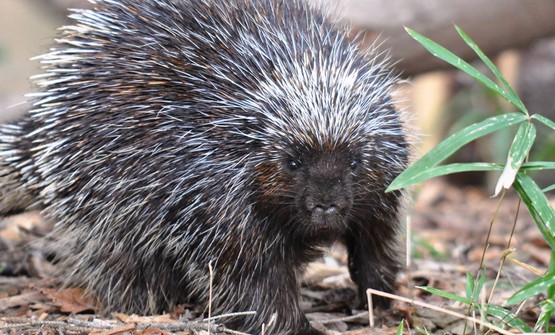 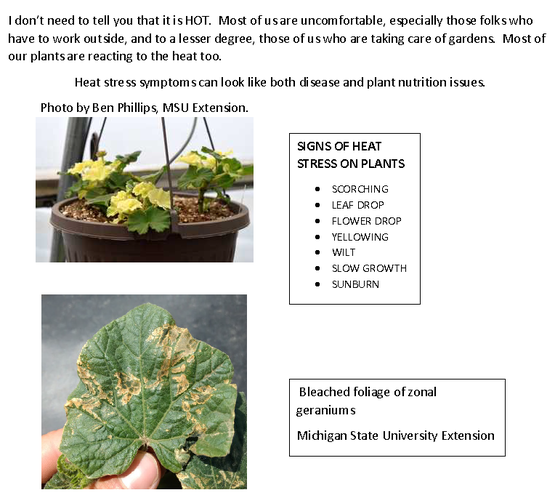 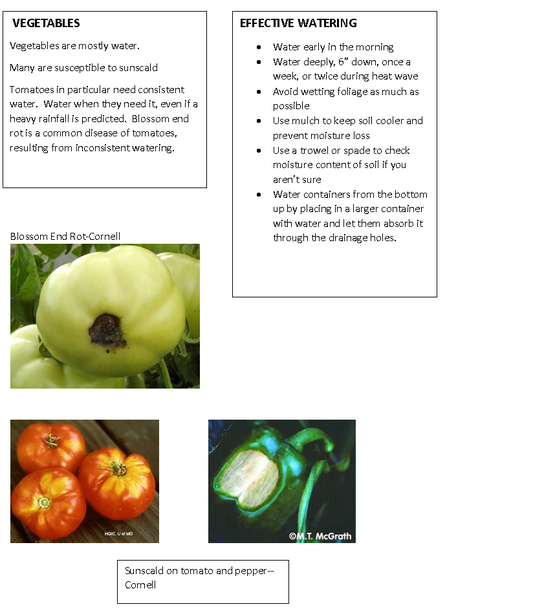 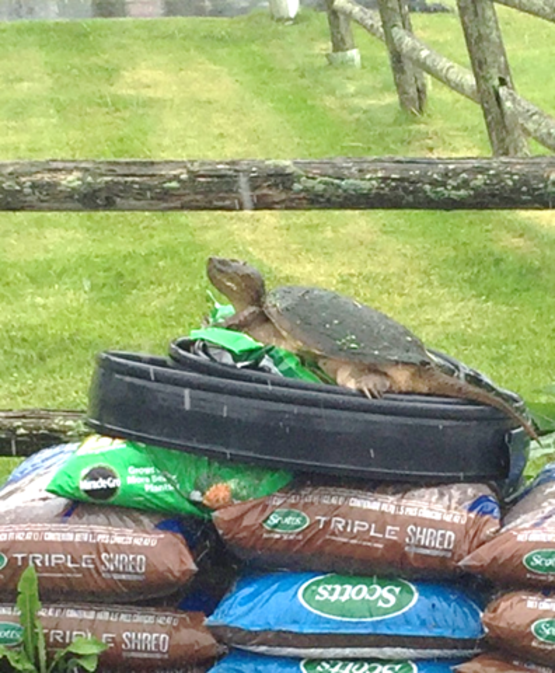 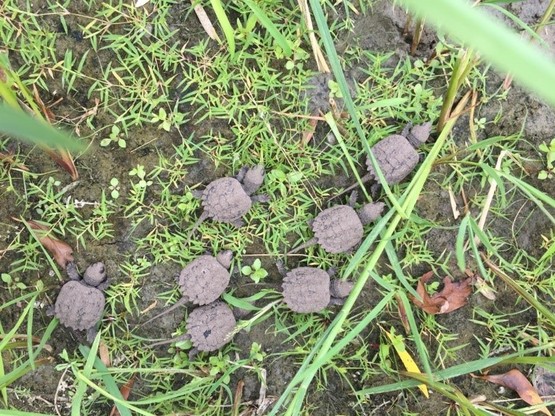 I took these photos last year of a female snapping turtle and 2 months later, a bale of baby snappers. Really, a single baby turtle is called a hatchling but a group of them are called a bale!

I watched this female snapper climb to the top of this mulch and edging in the corner of my yard. I wasn’t sure she was going to make it, but she did. Do you think she was scouting out a good place to lay her eggs?

When she started coming down from her perch, she took a tumble and landed upside-down on the driveway. I was afraid she would need help, (I didn’t want to get snapped), but with her powerful legs and neck muscles she flipped herself over and walked away. She eventually found a suitable place for her eggs.

Two months later we discovered this bale of turtles. Dirty from clawing their way out of the nest, which is underground, but healthy and on the move.

Did you know that the temperature of the turtle egg while it’s incubating determines whether the turtle babies are male or female? Some years ago I was fortunate enough to visit the Cayman Turtle Education Centre & Hatchery in the Cayman Islands. The researchers there, in their quest to prevent the extinction of some endangered turtle species, remove turtle eggs just laid in the sand and incubate them at temperatures that ensure male and female hatchlings. The idea is to create a good male-to-female ratio. Important work, don’t you think?

Yesterday morning as I walked out my front door, as I always do to check on my gardens, I saw this turtle sitting in my yard. 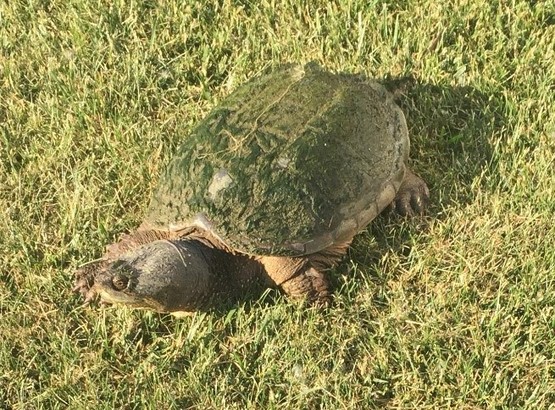 She was the second turtle this week that came looking for a place to lay her eggs. She headed for one of my flower beds and I followed, maintaining social distancing to avoid frightening her.

After pushing thru my flowers, she decided the bed didn’t meet her needs and moved on. She wandered across the driveway, stopping now and then to raise up onto her toes and survey the area with her head held high.

Seeing another area to inspect, she crossed the driveway, going under two vehicles, and arrived at her destination. Walking alongside this raised bed and pushing dry grass and weeds aside with her nose, she found a comfy spot, dug a nice hole with her feet and settled in.

After ten minutes or so, she changed her mind and was on the move again. Eventually she ended up close to the spot she started from, dug a hole, spent half an hour laying eggs, buried them to her satisfaction and headed back to the lake.

She knew what she wanted, and needed, and achieved her goal. A lesson for all of us!

How to Submit a Soil Sample

Note: Soil samples will be picked up weekly on Thursdays at 10 a.m. Samples dropped up after this time will be looked at the next week.

CCE Clinton County is accepting soil samples to be dropped off at the office. Note: Starting June 22nd CCE Clinton will be open with limited availability for patrons to drop off samples and pick up necessary forms. Regional specialists, and most staff, continue to work from home so we urge you to call ahead 518-561-7450 or email us at lsw89@cornell.edu.

If able, we urge you to fill out the paperwork ahead of time:

There is a drop box outside our front door with a clipboard that contains blank soil sample forms and envelopes for payment ($5 per sample). If able, please pay by a check made out to CCE Clinton. Soil samples may be left on the porch, or set inside the door in a sealed plastic bag with your name and number on it.

If you are looking for how to take a soil sample, please visit the following page:

How to Take a Soil Sample