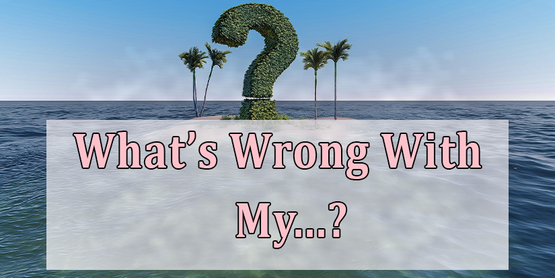 Image by Arek Socha from Pixabay

What is wrong with my plant leaves?

Are the leaves on your vegetable plants tattered, puckered, or disappearing little by little? What about your flowers and shrubs? Sounds like insect damage. Before you head for the spray, I would like you to consider a few things.

Are just the leaves affected, or is something eating your flowers or produce? How extensive is the damage? How much damage are you willing to tolerate?

Many insects are specific to certain plants and others will go after anything. Some are particularly fond of weeds. We can use their preferences to our advantage.

The tomato hornworm is specific to plants in the Solanaceae (nightshade) family including tomato, peppers, eggplant, and potato.It does a lot of damage but… 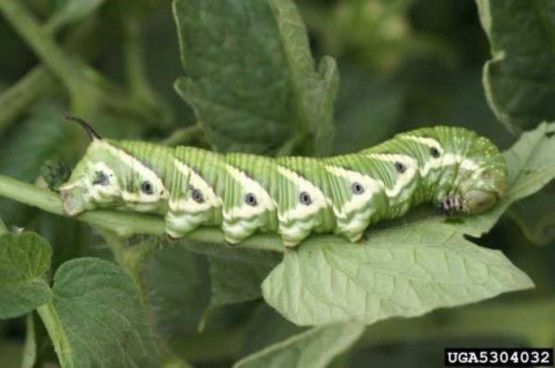 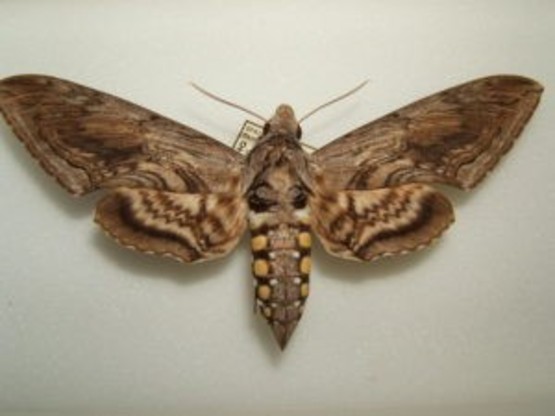 Do you think the damage caused to your plants might be worth this very large and beautiful moth?

Do chewed leaves but untouched produce warrant going after the insects? It’s a decision only you can make. I traded the Japanese beetles a hollyhock for my petunias. Priorities, you know. 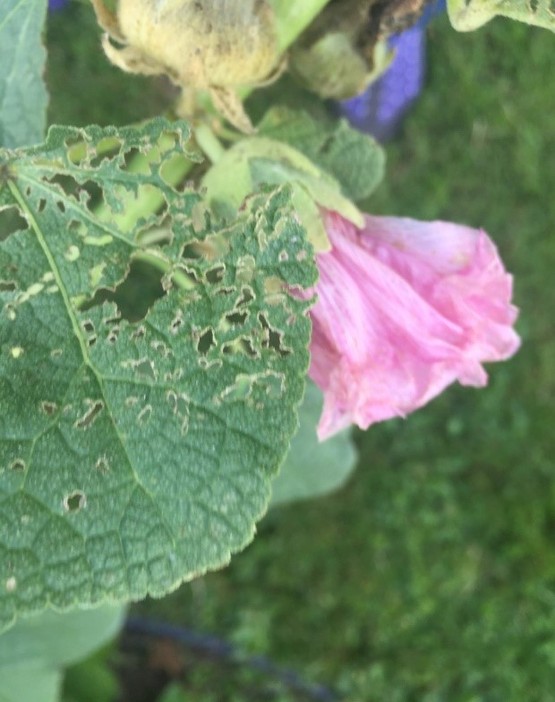 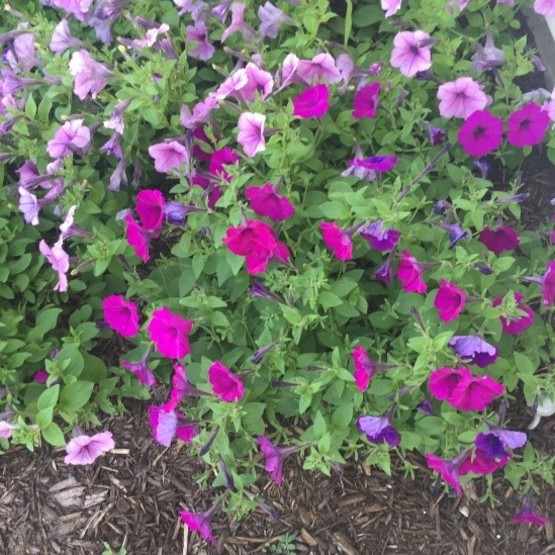 What’s wrong with my… squash?

As you probably know, squash is a cucurbit, as are cucumbers, melons, and pumpkins. They are members of the gourd family. But that’s not all they have in common.

I frequently hear from folks who want to know why their squash (cucumber, melon, pumpkin) plant has plenty of flowers but is not producing fruit. You may be surprised to find out why this happens. It’s a pollination issue.

To make it more confusing, if it’s too hot, too wet, too whatever, and not enough something else, the female flower, or male flower, may never bloom. For sure you won’t get fruit then.

Let’s assume we have male and female flowers, eventually at the same time. This photo from the University of Maryland Extension shows how they differ. 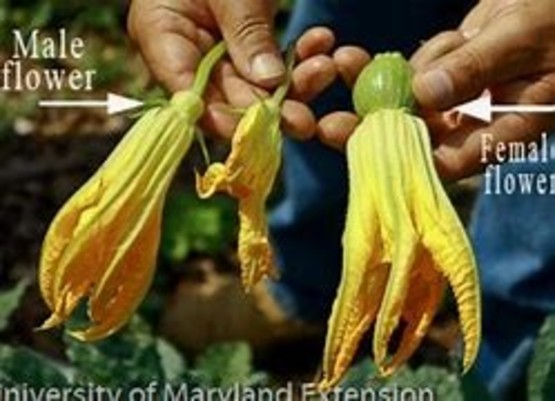 If you also have bees, nature will take its course and you will eventually have cucurbits. If you don’t, hand pollinating is an easy option, but can be back-breaking work. 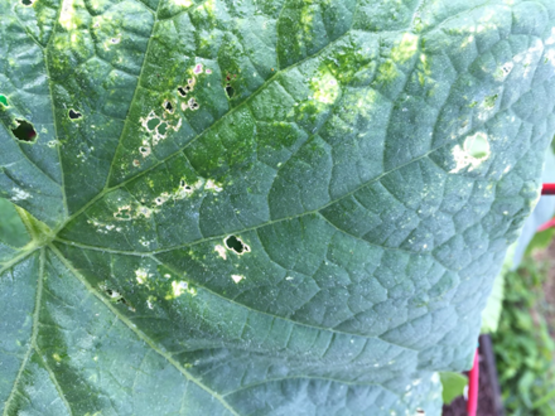 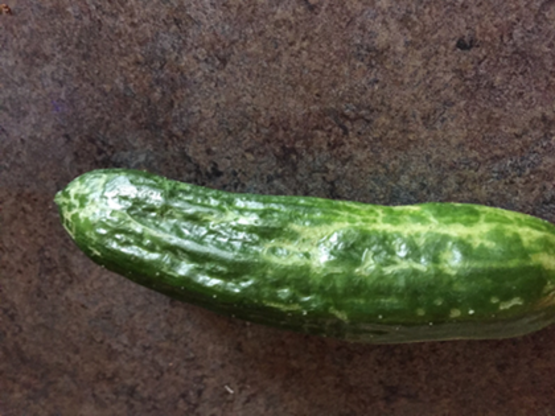 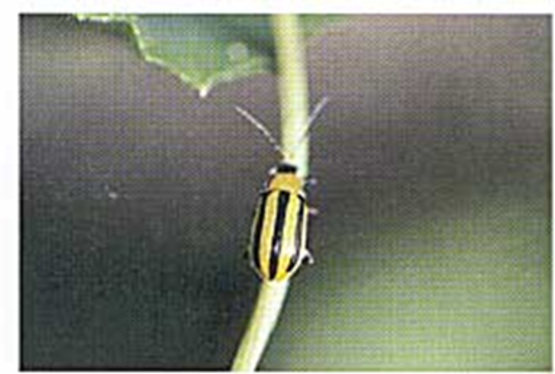 They not only chomp on the leaves and flowers of your cucumber plant, they are capable of transmitting bacterial wilt. The beetles acquire the bacteria by consuming plants already infected with it. Not all beetles carry the bacteria, but if they are contaminated they transmit the bacteria by their mouthparts or feces. Once the bacteria are transmitted to the plant they begin to reproduce. The plants will eventually die.

To determine if a plant is infected with bacterial wilt, press together two freshly cut sections of a stem and slowly pull them apart. If a "stringy" sap (bacterial growth and associated resins) extends between the cut ends, the plant has bacterial wilt. 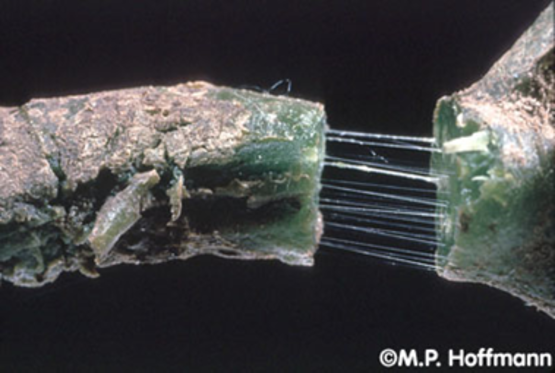 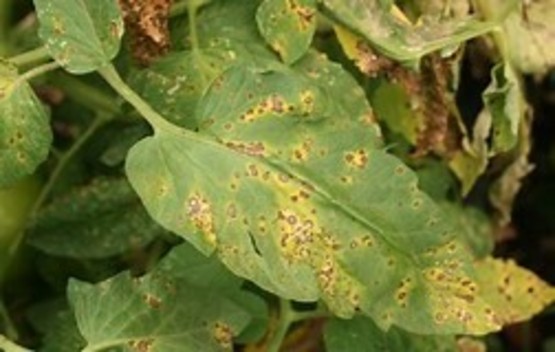 Septoria Leaf Spot is a very common fungal disease of tomatoes potatoes, and eggplant. This disease manifests on the bottom leaves of the plant and work their way up. Remove the affected leaves as they occur. Water at the root level to avoid splashing spores on the leaves. A fungicide specifically made for use on tomatoes will slow the disease. 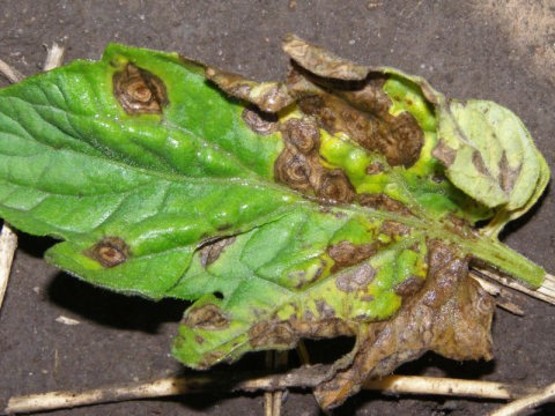 We frequently lump septoria and early blight together as they both manifest from the bottom leaves up, are both fungal diseases, and the treatment is pretty much the same. Below are signs and symptoms of early blight.

Signs and symptoms of early blight


NOTE: EARLY BLIGHT DOES NOT REQUIRE REMOVAL OF THE ENTIRE PLANT. THAT’S LATE BLIGHT, A VERY DIFFERENT SET OF SYMPTOMS. IF YOU SUSPECT LATE BLIGHT, TAKE A SAMPLE TO THE EXTENSION OFFICE FOR VERIFICATION BEFORE REMOVING PLANTS. 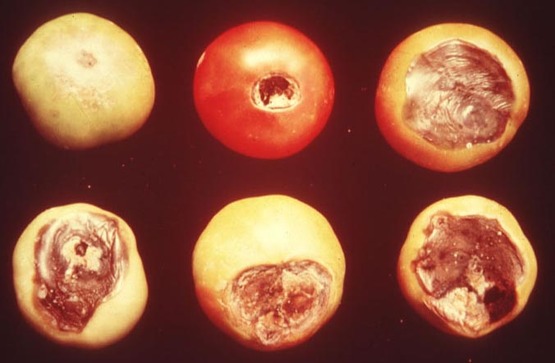 Blossom end rot manifests as its name suggests. The part of the tomato, (pepper, zucchini, eggplant) at the farthest point from the stem is the blossom end.

You will find some sites, or gardening articles, that tell you blossom end rot is caused by a lack of calcium in the growing tomato. However, it’s unlikely here in the North Country, that our soils lack adequate calcium. The problem is getting the calcium from the roots into all parts of the plant. That takes consistent watering.

Factors that influence the uptake of water and calcium by the plant have an effect on the incidence and severity of blossom end rot. The disease is especially prevalent when rapidly growing, succulent plants are exposed suddenly to a period of drought. When the roots fail to obtain sufficient water and calcium to be transported up to the rapidly developing fruits, the latter become rotted on their basal ends. Another common predisposing factor is cultivation too close to the plant; this practice destroys valuable roots, which take up water and minerals. -- Cornell

Control of blossom end rot is dependent upon maintaining adequate supplies of moisture and calcium to the developing fruit .If the weather forecast is for rain tomorrow but your plants need water today—water them!